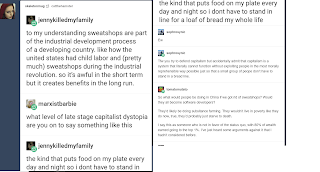 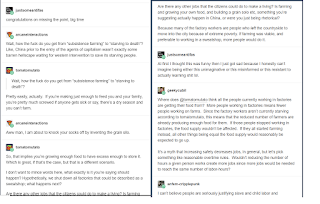 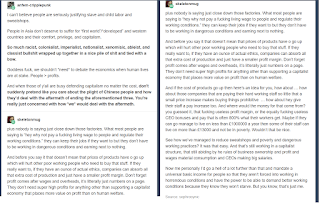 [Three screen grabs of a tumblr comment thread. transcripts below]

First picture:
[Jennykilledmyfamily] To my understanding sweatshops are part of the industrial development process of a developing country. like how the united states had child labour and (pretty much) sweatshops during the industrial revolution. so it's awful in the short term but creates benefits in the long term.
[marxistbarbie] what kind of late stage capitalist dystopia are you on to say something like this!
[Jennykilledmyfamily] The kind that puts food on my plate every day and night so I don't have to stand in line for a loaf of bread my whole life
[Sophrosynic] ew
[sophrosynic] TFW you try to defend capitalism but accidentally admit that capitalism is a system that literally cannot function without exploiting people in the most morally reprehensible way possible just so that a small group of people don't have to stand in a bread line
[tomatomutato] So what would people in China be doing if we got rid of sweatshops? Would they all become software developers? They'd likely be doing subsistence farming. They wouldn't live in poverty like they do now, true but they'd starve to death.
I say this as somebody who is not in favour of the status quo with 80% of wealth earned going to the top 1%. I've just heard some arguments against it that I hadn't considered before.

second picture:
[justsomeantifas] congratulations on missing the point, big time.
[arcaneinteractions] Wait how the fuck did you get from "subsistence farming" to "starving to death"? Like, China prior to the entry of the agents of capitalism wasn't exactly some barren hellscape waiting for western intervention to save its starving people.
[Tomatomutato] "Wait how the fuck did you get from "subsistence farming" to "starving to death"? " Pretty easily, actually. If you are making just enough to feed you and your family you are pretty much screwed if anyone gets sick or so there's a dry season and you can't farm.
[arcaneinteractions] aw man i am going to knock your socks off by inventing the grain silo
[Tomatomutato] So that implies that you are growing enough to have excess to store it. Which is great if that's the case but that's a different scenario. I don't want to mince words here but what exactly is it you're saying should happen? Hypothetically, we shut down all factories that could be described as a sweatshop, what happens next?
Are there any other jobs the citizens could do to make a living? Is farming and growing your own food and building your own grain silo etc something you are saying should actually happen in China or are you just being rhetorical?
Because many of the factory workers are people who left the countryside to move into the city because of extreme poverty. If farming was viable and preferable to working in a sweatshop more people would do it.
[justsomeantifas] at first I thought this was funny then i just got sad because I honestly can't imagine being this unimaginative or this misinformed or this resistant to actually learning shit. lol
[geekycubil] Where does @tomatomutato think all the people currently working in factories are getting their food from? More people working in factories means fewer people working on farms. Since the factory workers aren't currently starving according to tomatomutato this means the reduced number of farmers are already producing enough food for them. If these people suddenly stopped working in factories the food supply wouldn't be affected. If they all started farming, all other things being equal, the food supply would reasonably be expected to go up. It's a myth that increasing safety decreases jobs, in general, but let's pick something like reasonable overtime rules. Wouldn't reducing the number of hours a given person works create more jobs since more jobs would be needed to reach the same number of labor-hours?

Third picture
[anfem-cripplepunk] I can't believe people are seriously justifying slave and child labour and sweat-shops. People in Asia don't deserve to suffer for "first world/developed" and Western countries and their comfort, privilege and capitalism.
So much racist, colonialist, imperialist, nationalist, xenomisic, ableist and classist bullshit wrapped up together in a nice pile of shit and tied with a bow.
Goddess fuck, we shouldn't need to debate the economics when human lives are at stake. People >profits.
And when those of y'all are busy defending capitalism no matter the cost don't suddenly pretend like you care about the plight of Chinese people, and how they'd deal with the aftermath of ending the aforementioned three [slave and child labour and sweatshops]. You're really jsut concerned with how we would deal with the aftermath.

[Skeletonmug] plus nobody is saying just close down those factories. What most people are saying is “hey why not pay a fucking living wage to people and regulate their working conditions.” they can keep their jobs if they want to but they don’t have to be working in dangerous conditions and earning next to nothing.

And before you say it that doesn’t mean that prices of products have o go up which will hurt other poor working people who need to buy that stuff. If they really want to, if they have an ounce of actual ethics, companies can absorb all that extra cost of production and just have a smaller profit margin. Don’t forget profit comes after wages and overheads, it’s litterally just numbers on a page. They don’t need super high profits for anything other than supporting a capitalist economy that places more value on profit than on human welfare.

And if the cost of products go up then here’s an idea for you, how about ... how about those companies that are paying their hard working staff so little that a small price increase makes buying things prohibitive ... how about hey give their staff a pay increase too. And where would the money for that come from? you guessed it, that fucking useless profit margin, or the equally fucking useless CEO bonuses and pay that is often 800% what their workers get. Maybe if they can go manage to live on less than £1000000 a year then some of their staff can live on more than £13000 and not be in poverty. Wouldn’t that be nice.

See how we’ve managed to reduce sweatshops and poverty and dangerous working practices? It was that easy. And that’s still working in a capitalist structure, that still abiding by he rules of business ownership and profit and wages material consumption and CEOs making big salaries.

Now me personally I’d go a hell of a lot further than that and mandate a universal basic income for people so that they aren’t forced into working in horrendous conditions and have the power to be able to demand better working conditions because they know they won’t starve. But you know, that’s just me.

also for the love of kittens can we please stop with this othering of an entire continent (Asia) and country (China) and stop treating them like some parochial slightly stupid cousins. There are actually some super developed economies in Asia as well as incredibly complex socioeconomic and political histories which make it not a straightforward issue and makes comparison to countries like the USA meaningless. Also we need to stop thinking that terrible working conditions and virtual slave labour only happen in "foreign places" it happens in the US and the UK and probably other "developed" countries too.

If you like what I do you can support me by buying me a Ko-Fi
Posted by Robin at 18:00