You're missing the point.


The above strip from webcomic Living With HipsterGirl & GamerGirl came across my Facebook feed the other day with a number of comments along the lines of 'women judge men by their looks to.' and 'male superheroes are not good aspirational figures either.' First of all this piece is not about the writing or quality of LWHG&GG - I only know it in passing and don't feel inclined to critique. This article is about some of the arguments that this strip references and spurs.
The argument made was:
My counter argument is that this is largely missing the point. These arguments and the comic strips that illustrate them (as shown above) are ignoring the real issue and, in extreme cases, wilfully subverting the argument in order to stop any progress on the issue.

Now I am not saying that impossibly slim, large breasted women don't have an influence on how women see their own bodies and their aspirations for self image, but that isn't the central problem. I am also very keen not to dismiss the problems faced by men who look at the buff bodies of superheroes and worry about their own waistline in comparison; certainly I know several guys who have made remarks along the line of 'I wish I had a six pack' and it can cause distress and even psychological disorders. The issue however is not comparable to the issues of female character portrayal in comics*.

The bodies of male and female characters are presented in startlingly different ways. Even if we assume that 'aspiration' was a key issue look at we are working with. The male characters, whilst certainly idealised or exaggerated versions of an athletic healthy male physique are within the realms of possibility. There are men in the real world who, through exercises, body building and tailored diets can mimic the broad shoulders and rippling muscles of Superman. It might not be attainable by everybody or even a necessarily healthy lifestyle but it is not completely outrageous. The female character's on the other hand more often than not display physical properties that are not only out of the reach to more than a dedicated few but are unattainable without significant surgical intervention. In fact some of them break all rules of human anatomy.
Men may worry about keeping trim and looking like the clean cut buff superhero but, and here we start to approach the real issue women are faced with images that completely defy reality.** Breasts of the size, shape and position generally only seen by those who have extreme implants; bizarre proportions; the ability to show both breasts and bum simultaneously; severe spinal curvature and so on and so forth.
These physical features are not just difficult for women to attain, they are physically impossible. They are completely fictitious depictions of the female form. The female characters of the comic world are beyond fictitious. They are contorted pastiches of the female form at times barely recognisable as humans. The artists, not satisfied with real women or real anatomy, have populated their comics with something else and done their best to convince us that these are women, and furthermore that these are women that they and their male consumers, prefer and find attractive. How exactly can women aspire to be something that can not physically exist? What message does it send, that no matter how well you eat, how much you exercise, even if you resort to surgery, you will never match these fantasy women?

That is only the beginning, a small argument to address the concerns that characters can not be treated as aesthetically aspirational, male or female. Lets move on to a bigger issue: how they are perceived and treated and the ramifications in the wider world. Again referring to the comic strip I opened with, featuring posters of Power Girl and Superman. Here they are again so we can get a clear look: 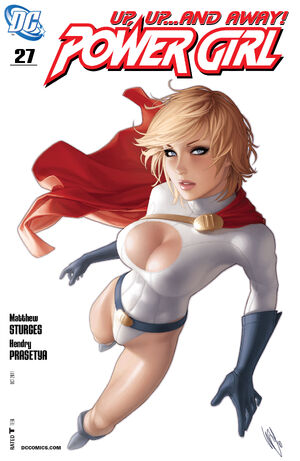 Both images are clearly stylised humans with certain characteristics emphasised and highlighted. Power Girl has the focus square on her cleavage and breasts, her slim legs are displayed, and she is posed in such a way to show of a barely covered crotch. Sexualisation is a clear goal in this (and many other) image of Power Girl. Superman has muscular legs and arms at the forefront, a steely expression, powerful stance and gripped fists. Power and strength are characteristics emphasised here.

Let's assume we are new to these franchises; what do we learn from these characters by their cover shots alone (and these are cover shots, a readers first meeting of the characters within the pages)? Power Girl is female, probably young, she has large breasts, the fluttering cape suggests she might be able to fly. And that's about it. Superman looks strong and determined, he looks powerful and dynamic, I'm pretty sure he's at least floating if not flying and he clearly gets into some interesting and dramatic situations based on that background. Superman even speaks!
Just from how the characters are drawn we are able to determine so much more about the personality and character of the male character than the female character.***
This, This is the big issue. Female characters are first and foremost, carriages for improbable anatomy and scanty clothing; they are a source of titillation in a world of men. Personality traits, skills and talents are secondary to their physical attributes and sexual availability.
Male characters are allowed to be characters in their own right, with complex plots, a multitude of skills and abilities and distinct personalities that are apparent from the outset. Their physique is a part of this complimenting their other attributes rather than overshadowing.
Females therefor, are diminished in the world of comics games and animation. They are reduced to lesser human beings, valued primarily for how they look, a set dressing to the world of dominant male characters. If we want to talk about aspiration, let's not talk about the difficulty in attaining some fantastical anatomy but in the fact that women have so little to aspire to in the world of superheroes and adventurers. Men most certainly do have a lot of pressure put on them; they are presented with the lions share of personality, strength and responsibility to juggle in stark comparison to the hollow female characters. Some men may struggle with this and dislike the pressure to be some bizarre male ideal and at the same time women are told that all they can aspire to is to look pretty and not get in the way of their stronger, tougher, more resourceful male counterparts.
This is not an argument of 'men struggle with media images too'. It is an argument about what we have to aspire to and what those aspirations teach us about gender in broader society. Young boys who grow into men who believe they must always be tough and strong and look after the women and that women are weaker, for their pleasure and can't be relied upon. Women, who tirelessly told that the most important thing is how they look not what they can do.

The original comic strip complains that women who look upon male characters shouldn't complain about how females are depicted. But the argument isn't one of attraction, it is one of depiction. It is about characters being characters and not merely a collection of body parts. Men may have a lot of things to live up to but women have so little. That difference spills out from fantasy media and into the everyday lives of women. Men who look upon female characters as attractive mannequins filling the background of male conquests are encouraged to see women in the real world that way. Yes, there is a problem too with society expecting some exaggerated model of masculinity which can be a struggle for many men to live with. Next to them live a multitude of women who are bombarded with the expectation that they are nothing. They have no value. Their opinions and abilities are worthless next to men.
That is the argument against the sexualisied depiction of women in comics. It's not about attraction, or aspiration. It's about being allowed to be more than tits and ass.

**Yes I know we are dealing with sci-fi and fantasy here, with superheroes who can fly and support the weight of fully laden tanker. There is however, some reality in all these stories and settings and clearly more reality in the presentation of the male physique. Stop nitpicking.

*** First impressions count and comics are a visual media that rely on images heavily to develop characters and tell a story. Even in the context of a story arc and dialogue with a comic's pages, the visual impact of how the characters are depicted (including their costume, posture and stances during action) are are extremely important and frequently hold to this comparison.
Posted by Robin at 21:55